The New Venture Theatre is a registered charity, run entirely by volunteers and managed by a committee of Trustees, elected annually by the members.
All our major productions are open to the public. We also hold a number of social events during the year as well as workshops, play readings and a weekly acting class. 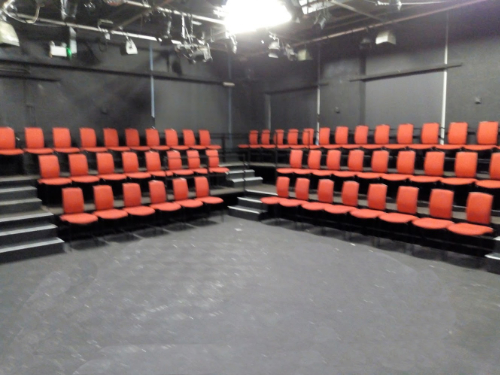 Our Studio Theatre provides a flexible performance area, with flexible seating for up to 80. The South Hall operates as a licensed bar for members and audiences during productions, social events etc. It also

doubles as a rehearsal space.

Upstairs we have dressing rooms and the Theatre Upstairs. This is a traditional theatre format with 75 seats. After a number of years being refurbished it re-opened during our 66th season, with a celebratory evening that included a short extract of the last play performed in the space almost 10 years previously.

A bit about our past

The New Venture Theatre was originally a church school. Built in 1841 - the school stood next to a church, which was on the site of Christchurch Flats adjacent to the theatre to the north.

In 1958, following a fire which destroyed the church, we took on the rent of the first floor of the old school and it became our permanent home. Productions continued in the main theatre on the first floor; the ground floor being used for various activities and hires by the church. However, in 1981 the church decided to sell the building and New Venture Theatre was given the option to buy. Somehow the money was raised and the whole building became The New Venture Theatre.

Since then there have been various changes to the interior, the new toilet area was developed with funding from the Arts Council, a lighting box was developed from an old attic area above the entrance lobby, a support pole - like that in the South Hall - was replaced with a huge RSJ in the Studio Theatre and the bar was built. In 2011 we were able to install an air conditioning system into the Studio, again with funding assistance from the Arts Council. All these developments were done with the help of members.

When licensing regulations changed in 2003 restrictions were put on the use of the Theatre Upstairs - where the New Venture Theatre had started - and a major refurbishment plan was drawn up. During refurbishment performances centred on the ground floor Studio Theatre, which adds its own challenge to any production as well as a feeling of intimacy and inclusion for the audience. In 2013 the newly refurbished Theatre Upstairs was re-opened and now both spaces are used for productions giving us a greater flexibility.